I had to get out of the city
The lax
The apathy
The gloom
so i came to Texas
Every time I try to vacation, I realize i SUCK at it. . . I get bored. .. guilty. . .restless. . . but sometimes at home, all I want to do is be ON vacation
so i came to Texas
I needed a break from the "scene" (or lack thereof). . .I needed direction. . . I needed sun
so i came to Texas
and when I got off the plane, it was dark. .. and bleak. . . .and rainy. . .
so i ate
and had some wine
and the sun came out
i may not come back with any answers, but at least I don't have to deal with monkeys... cuz I have no cell-phone reception
I trust you all had a Merry Christmas
;^)
Posted by Rachel at 8:35 PM 2 comments 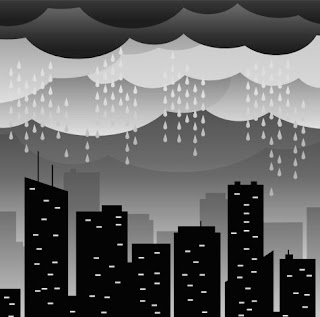 One of the keys to surviving the dark, miserable Seattle winter, is that you have to remember to leave your apartment sometimes.
Even though you wake up at 8:30 AM, and you have to turn all the lights on to see. . .
Even though all your gigs get canceled because of flooding (making you wonder how you will pay your rent). . .
Even though the thought of venturing out in to the windy, dark abyss terrifies you back in to sleep. . .
Even though you'd much rather stay in and bake your 13th batch of snickerdoodles. . .
You HAVE to leave your apartment sometimes.
Because the cliche adage "After darkness, light" IS true (it turns out).
(Well. . until it ISN'T true anymore. . . and 8 light minutes after the sun burns out we are perpetually in darkness. . . and slowly evolve (or de-volve) to night-walkers with big teeth, bald heads, forever dilated pupils, and an appetite for human flesh. . .
But I mean, that's not supposed to happen til 2012, right?
Well THERE'S a valid reason not to pay for cable anymore. . . . . . . . . . . . . . . . . . . . . )
Posted by Rachel at 8:52 AM 1 comments

Artists are a masochistic bunch, really. We throw our souls out into the world only to get criticized, censored, rated, chewed up, and spit back out. There is only a small percentage of our work that is praised positively, and that's the only thing that keeps us going (Not to mention the horrible process that IS auditioning. . . seldom ever actually knowing when one will hear back either way). When we don't have anything positive for a long time. . . it becomes very difficult to keep going.
I can't quite say that I'm there yet, but I do believe I am on the cusp. . .
I haven't done too much theatre/live stage work since I ended my contract with Royal Caribbean Cruise Lines 2 years ago. . . and the theatre scene in Seattle is surprisingly nearly obsolete. . so I have to try elsewhere.
My sister's friend gave me an audition tip for Cirque Du Soleil's new Vegas show, Viva Elvis. The great thing about Cirque is that they accept (and encourage) video submissions. . which is perfect for broke li'l old me who can't afford dinner much less a plane ticket. I sent in my video and the first waiting game began. ***REFER TO BEGINNING PARAGRAPH IN WHICH I REMIND YOU THAT ARTISTS ARE MASOCHISTS******
I heard back from them via e-mail about 2 1/2 weeks later, asking for more material to audition (what we in the performing biz call a call-back) and I again sent in a my updated video.
(Did I mention that my boyfriend is a photographer? Well. . . he is, and luckily we have a small light kit and various background choices. . . kudos for me) (P.S. . . you can see his fantastic work here)
The waiting game continues. . . ***REFER TO BEGINNING PARAGRAPH AGAIN***
A week went by.
Two weeks.
Three weeks
And then, FINALLY, I saw the indescribably anticipated e-mail from Cirque Du Soleil in my inbox, telling me . . . Congratulations. . . you are now on the Casting database
Ok. . . .
So that's great. . for sure. .. but what does that mean?
Well. . . the waiting game STILL continues ***YOU GET THE POINT***. . . I guess it means that they know me now. . . I maybe have a higher "priority" for casting. . . and I am definitely not in the "reject" pile (Yet).
I say all of the above to say this, really. . .
We performers have a stressful, unstable, panicky life. . . but when we get that ONE thing (or get one step closer to that ONE thing). . . that THING that we've been thinking about. . . dreaming about. . .
It sure does make all the $hittiness worth it. . . don't you think?
Here is one of the videos that I auditioned with.
Posted by Rachel at 6:38 PM 1 comments

I know that we are repeatedly told that money can't buy happiness. . . but it sure would buy me a new pair of jeans, a haircut, and christmas presents. . and that would make me happy.
As I've gotten older, I've developed a love/hate relationship with the holidays. Long gone are the simple days of waiting for a strange man to enter my house, carrying everything I've asked for. (Except for the puppy surprise I begged for when i was 9, but that's another story. . .) Nevermore can I get away with giving "hug coupons" to my parents. The excitement and anticipation of the season has since been diluted to another stressful, worrisome time of year.
While I LOVE the decorations, the weather, the music, the parades associated with this time of year, I always let my monetary status get the better of me, and I hate to say it is the source of my annual holiday funk.
Why do I let this happen every year? Why can't I, like Cindy-Lou Who find and understand the TRUE meaning of Christmas? Why do I, a grown woman, get overly-emotional and teary-eyed at parades?
I don't know.
But I do know that Christmas isn't really about presents. . .
It's about spiked egg-nog.
And I'm a little lactose intolerant.
Posted by Rachel at 4:41 PM 4 comments

I don't know if it's strictly a Seattle thing, but every day I look through Craigslist, I see someone requesting free services. Whether someone wants a band to play for that private party but can't afford to pay them, a venue wants a band to "audition" for 3 hours, or someone is looking for free wedding pictures (I $hit you not), Craigslist is full of moochers that apparently are also suffering from the economic downturn. (ooh oooh. . I forgot to mention that most of these people promise to give great recommendations, reviews, or exposure to the said "server")
This is my latest contribution to Craigslist.

Can anyone help me out?

I am a full-time professional performer (that means I get PAID and MAKE A LIVING for the work that I do. . . ) but due to the recent craigslist phenomena of people asking for free services (and my fellow performers actually DOING it) I have fallen on some hard times. You see, there is not quite enough paid work to go around, and since there are several artists out there diminishing the integrity and pay scale of all local performers, I am finding it difficult to pay the bills.

So I've decided to ask you craigslist people, so obsessed with free stuff, to send some my way.

Here are a few things I really need, but cannot pay for. . .

Don't forget. . . anyone who is able donate their time to me will get great exposure, a stellar revue on yelp, and ridiculed in my blog.

We are taught as children and throughout life that comparing ourselves to others is unnecessary. . . that success is measured differently for different people. . . but practicing this as a performer is virtually impossible. An entertainer's success is fairly obviously measured. .. through our pay scales, through venues (Broadway, or Madison Square Garden, or Nuemos on a local level). On a daily basis, our artistic lifestyle and competition mentality are awakened by the simple every day habit of logging into our facebook account. So And So has a callback for a Broadway show. So And So booked a National Tour. So And So just got signed by a major record label. While it is apparent that the artists attitude is that nothing is good enough. . .there is always room to grow. . .and this gig is temporary until the next great thing comes along, it is so easy to compare ourselves negatively to other artists and performers. (In the same way positively, too. . one of my favorite pastimes as of late is to search youtube for video auditions and watch in horror. . .)

What is the solution to this daily reminder of disappointment? Well. . . I could stop logging in to facebook (not an option. . totally addicted), I could delete all my friends that I deem successful (perhaps a bit much), I could start thinking positively about my life, realize that my success is MY SUCCESS, and open my mind to the idea that somewhere in the world there is a fellow performer sitting in front of their laptop considering deleting me as a friend for the same reasons. . . (I don't know. . the whole "positive thinking" routine is reminiscent of too many Oprah book club books)

While I start another day the same way I have for so long. . . Checking my inbox to see if the casting team for the show I did a video callback for has responded yet. . . Drinking my cup of coffee and doing an O'Ekaki puzzle. . . Praticing music and thinking this is the day something will change. . . I will (and do) try to practice my own form of positive thinking. . . it's only 6 hours until 5 o'clock. . .and then I can have some wine.

I have run quite the gambit of regular jobs . . . from retail, to restaurant service (hostessing and waitressing), to canvassing (fundraising on the street. . . to usually un-excusably rude passersby), to retail again. So as the economy kept dwindling, and I began developing carpal tunnel syndrome from filling out application after application, and refreshing craigslist every hour on the hour became too exhausting, I realized I had to stop. While I have been a professional performer for most of my life, I never really focused on that being my entire job.

This is why I decided, in February of 2010, to make the switch to a full-time self-employed performer. It has proven to be a difficult task, yes. . . . having to drastically decrease my "drinking" and "fun" budget in order to pay rent and bills, never knowing how much money I will actually make in a given month, and more often that not, playing gigs to the proverbial "chirping crickets", but at the end of the (long. . .stressful) day, I truly am grateful to be able to do what I love.

I am a music whore. I am open to doing anything and everything that will pay me involving music. I teach voice lessons out of my home studio in Capitol Hill, I gig and sit in with several different groups in the greater Seattle area, and I am always looking for the next project to keep me busy and well fed (and well-wined).

While I hear from my friends who are married, child-bearing, and otherwise "successful" (see my next post for more of that joy), I sit on my fold-away couch in my small apartment where I live with my boyfriend, Val, and dog, Milly, wine in hand, representing the ever-growing number of full-time performers around the world. . . we are not (yet) sellouts. . . we are under-rated. . . we are on the "poor" diet. . .we are starving artists.

Rachel
Rachel is a performer and voice teacher located in Seattle, WA. She released her first full length album, Somebody Said, in July. Currently, she gigs in the greater Seattle area with her rock band, City Faire, jazz duo, Charrva, and multiple jazz combos around town. Visit her website here